Law enforcement descend in waves on Belgrade on Monday, November 1 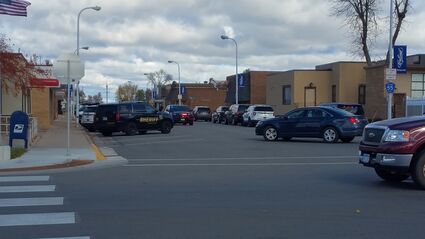 This was the scene on main street in Belgrade on Monday, November 1 just a few minutes after 12 p.m. What is shown are multiple law enforcement agencies staging their response to a hostage situation that was unfolding on the north side of Belgrade.

A law enforcement response from multiple agencies took place in Belgrade on Monday, November 1, as a hostage situation unfolded around 12 p.m. on the north side of town. Law enforcement staged their response to the situation outside the Belgrade Police Department, with as many as 21 squad cars gathered at one time on Main Street. The house that was the center of attention was on the far western edge of the trailer court, but it was not a trailer house.

A county S.W.A.T. team responded to the scene at 12:29 p.m. The re-staging of a large set of law enforcement personnel took place at the intersection of Washburn Avenue and Stearns County Road 197 at that time on the north side of Belgrade. Law enforcement were working to ensure that there is no threat to the general public. They had advised people of Belgrade, including downtown businesses, to lock their doors and stay away from the area.

As of 2 p.m. on Monday, the stabbing victim was at the hospital receiving medical care.

At mid-afternoon, law enforcement told businesses that it was safe to re-open out of lockdown.

Other information was posted via cell phone at the Jaguars Sports extended coverage blog as this was unfolding earlier on Monday afternoon. Click on the following short link to view that: https://bit.ly/3jTrLKA.

The Belgrade/Brooten Police Department, along with the Stearns County Sheriff’s Office, are currently involved in an ongoing investigation in the City of Belgrade. The incident is current and active with a large police presence including specialized vehicles. There is no danger to the public at this time; however, the public is asked to stay out of the area.

As the matter is ongoing and an active situation, no further details will be released at this time.

Update at 17:20 on Monday: as of 4:30 p.m., law enforcement were still working on getting the perp out of the house. Communication was established, but not much progress was made within the next two hours. The Belgrade Fire Department has been working all afternoon providing street barricades. It is a difficult situation for everyone involved.

Update at 18:00 on Monday: the situation has been resolved, and the perp is in custody. This is a huge win for law enforcement. By 7 p.m. on Monday, law enforcement were clearing out of Belgrade.