Climbing to the peak of 'Mount Stupid'

The question is: where is the top of Mount Stupid? 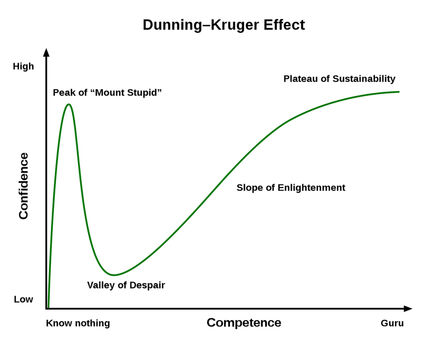 A graphic chart of the Dunning-Kruger Effect. Source: https://marcusraitner.medium.com/on-top-of-mount-stupid-9d38d1569225.

Each day in America, we climb closer to the top of Mount Stupid. The only question is: where is the peak of this mountain we're currently on?

Because they've fired unvaccinated health care workers, many of whom have beaten COVID-19 and have natural immunity, the state of Rhode Island has decided it's better to allow health care workers with an active COVID-19 case to care for patients. They have gotten that much higher on Mount Stupid that this is where they're at.

On January 1, 2022, the Providence Journal reported that the Rhode Island Department of Health has opened an option for COVID-positive health care workers to continue working if their facility is facing a staffing crisis.

This has been dubbed a "last-resort, crisis-staffing option" for COVID-19 infected health care personnel at hospitals and skilled nursing homes who are "mildly symptomatic."

The full story can be found online at the following short link: https://bit.ly/3sTcj6h. Towards the end, it includes a lie by the Rhode Island DOH spokesman (Joseph Wendelken). This man lied by saying that unvaccinated healthcare workers are at "greater individual risk" in blanket fashion. This is simply untrue. It is these types of lies given out by government(s) around the U.S. and the globe that leads the public to distrust their messaging. I have no idea if they will ever correct their lies.

A health care worker who has COVID-19 antibodies due to prior COVID-19 exposure and/or infection has no more individual risk than a vaccinated health care worker. Not only that, but the antibody decay on a month-to-month basis is lower with natural immunity than it is from the jab. This is why jabbed people need boosters every 5 to 7 months. It gets better (or worse) when you factor in the warnings from scientists about what could happen to people who get a fourth jab.

On December 23, 2021, the New York Times published an article about "immune system fatigue" that highlights how the panel of experts advising the Israeli government on COVID-19 have said that the third jab (the second booster in the series) should be applied just three months after the second jab (the first booster in the series). This panel of experts has told the public to wait five months from the initial COVID-19 jabs before administering the first booster. It seems they now lean to applying the third jab just eight months after the initial COVID-19 jab series was administered.

The NYT article included comments from Professor Hagai Levine, an epidemiologist and chairman of the Israel Association of Public Health Physicians. He provided a shocking statement: let's wait for the science regarding a fourth COVID-19 jab before telling everyone to go out and get the fourth jab.

A written summary of the discussion amongst this panel of Israeli experts was provided to the NYT newspaper, and this led to the story published on December 23 (and revised on December 25). The writer, Isabel Kershner, said in her article, "Some scientists warned that the plan could backfire, because too many shots might cause a sort of immune system fatigue, compromising the body’s ability to fight the coronavirus. A few members of the government’s advisory panel raised that concern with respect to the elderly, according to a written summary of the discussion."

The prospect of immune system fatigue from getting fourth or fifth COVID-19 jabs has not been a part of any public discussion by Minnesota state health officials. Time will tell if they will ever raise the idea that individuals who have received a COVID-19 booster will need a second or a third booster dose as they are doing in Israel. Both jabbed and un-jabbed local health care workers who have spoken to me personally are wary of being mandated to take COVID-19 booster shots, as is required by many health care facilities as well as colleges across the United States. (Please refer to my initial comments in this column about climbing Mount Stupid.)

As of January 1, 2022, Israel's population is 64.3 percent fully vaccinated. A total of approximately 46 percent of the Israeli population (who are vaccine-eligible) have received at least one COVID-19 booster jab. (Source: Our World in Data.)

In other news... on Monday, January 3, 2022, Hennepin County reported 35 percent of Minnesota's new COVID-19 cases, according to the 1-3-2022 report by the Minnesota Department of Health. The population of Hennepin County (1.266 million people) represents 22 percent of Minnesota's population. The 1-3-2022 report showed 2,385 new COVID-19 cases in Hennepin County. Also, according to Minnesota's COVID-19 website with information reported on December 29, 2021, a total of 954,316 residents of their county have had at least one COVID-19 jab (approximately 76 percent). In Hennepin County, numerous school districts force masks on their children. Also, numerous businesses are requiring proof of the COVID-19 jab before entering their premises. Those are two examples of what is happening in Hennepin County that are not happening at least in our local area of the Land of Rocks and Cows.

And yet in other news...on Monday, January 3, 2022, it was announced that the U.S. Food and Drug Administration of President Biden (aka "Brandon") is now promoting and pushing for universal COVID-19 jab boosting to children ages 12 to 15. This is taking place without the stamp of approval by the FDA's own scientific advisory board. What this means is that Biden continues to lie when he says they are "following the science" in their COVID-19 response.

Remember: the Vaccine and Related Biological Products Advisory Committee voted down the idea of giving the Pfizer-BioNTech's COVID-19 booster shots to most people last fall in September. The group instead voted to limit boosters to those aged 65 and older, as well as to people at risk of severe illness. They cited the lack of evidence (aka SCIENCE) showing the boosters are safe for younger people. Then, almost like clockwork, Biden's FDA approved Pfizer and Moderna boosters for anyone age 18 and older without input from its own advisory committee. We have to point out that Big Pharma underwrites approximately three-quarters of the FDA's drug review budget. (This is nothing new: this began with Congressional approval in 1992.) Source: https://bit.ly/3sSC5Yo. None of these latest events should surprise anyone.

And over in New York State...Bill DeBlasio 2.0, or as most know him as, new New York City Mayor Eric Adams, has announced he is considering pushing for mandatory booster shots for NYC workers.

We can also take a peek at Ontario in Canada, where almost 80 percent of the Canadian province is fully COVID-19 jabbed. They just recently began locking down schools, gyms and indoor dining. The new measures begin on January 5, 2022.