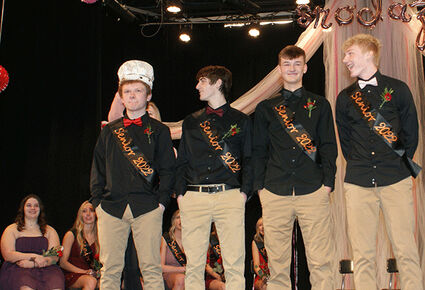 Belgrade-Brooten-Elrosa high school hosted the 32nd annual Sno-Daze coronation at Olson Auditorium on Tuesday, February 15. Students in grades 6 through 12 plus staff filled the seats and enjoyed a thoroughly entertaining ceremony.

In an action-packed game of Pictionary, all sorts of pictures were drawn on a SmartBoard on the auditorium stage.

Emcees for the ceremony were juniors Drew Thompson and Ella Halvorson.

The coronation concluded with Kailey Fischer and Spencer Lundberg being crowned the 32nd B-B-E Sno-Daze Queen and King. The February 17 issue of the Bonanza Valley Voice newspaper included numerous photos and extra coverage of the coronation ceremony.

The first B-B-E Sno-Daze week was held during the week of February 12-16, 1990, and it was held for 30 more years every school year until last year, when the pandemic canceled it. To make up for that, the high school held a Spring Fling in its place in May at the football stadium.