Jaguars claim Section 5A title for second year in a row 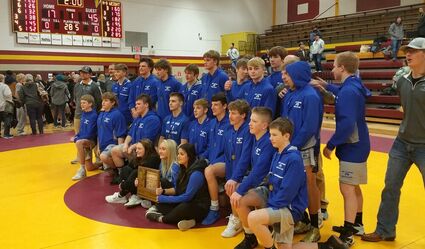 The B-B-E wrestling team gathers with their Section 5A championship trophy at Benson high school after defeating No. 5 state-ranked Atwater-Cosmos-Grove City on February 19, 2022.

It's a back-to-back performance for the Belgrade-Brooten-Elrosa Jaguars wrestling team after they won the Section 5A championship on Saturday, February 19 at Benson high school. It's the second straight season that the Jaguars will compete in the state tournament.

The Jaguars, seeded No. 1 in Section 5A, defeated No. 2-seeded and No. 5-ranked Atwater-Cosmos-Grove City 45-17. It was a big statement win for the Jaguars after they also throttled No. 4-seeded Minneota 47-20 in the earlier match.

The semifinal and championship round wins increase their overall record to 19-1 as they now prepare for the individual Section 5A tournament. That is set for Saturday, February 26 at Minnewaska Area high school.

The Class 1A state team tournament is on Thursday, March 3 at Xcel Energy Center in St. Paul.

(HD VIDEO) In this video, the Jaguars clinched their win over ACGC and a trip to the state tournament when Evan Young lost a 5-1 decision at 170 pounds. This put a potential comeback win out of reach for the Falcons.