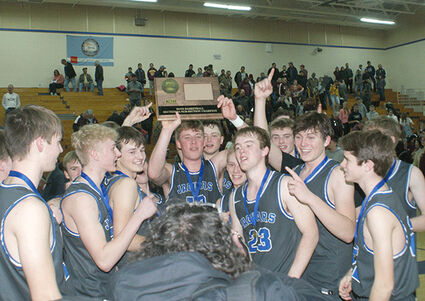 Ashton Dingmann hoists the Sub-Section 6A-South championship trophy above his head with his teammates surrounding him after the Jaguars defeated Hancock on March 15 at Minnewaska Area high school.

The Belgrade-Brooten-Elrosa boys' basketball team is back in a section championship game after getting stopped the past two years in the Sub-Section 5A-West championship. The Jaguars take a 25-4 record into the Section 6A championship after they dispatched No. 4-ranked Hancock 71-44 in the Sub-Section 6A-South finals on Tuesday, March 15 in front of a packed house at Minnewaska Area high school.

(HD VIDEO) Here's a lengthy video featuring the tip-off and first minutes of the sub-section championship game on March 15 between B-B-E and Hancock.

The section finals will be at 7 p.m. at Fergus Falls senior high school on Friday, March 18. Their opponent will be No. 2-ranked New York Mills (28-1), who were runners-up in the sub-section a year ago and have won this year and last year's Park Region Conference titles.

Video from the opening stage of the game is posted below. Catch daily updates for the Jaguars at the newspaper's sports blog: http://bbejaguars.blogspot.com.