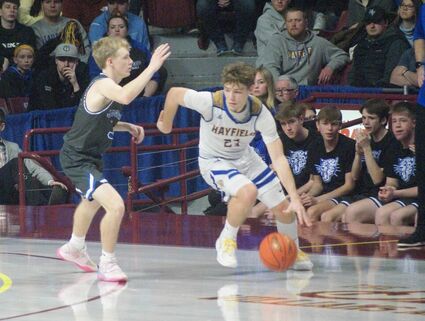 During the first half of the state finals, Will VanBeck guards Hayfield's Ethan Pack with part of the B-B-E reserves watching from the bench at Williams Arena on March 26 in Minneapolis.

The Belgrade-Brooten-Elrosa boys' basketball team had the program's third state title within its grasp in the final minute on Saturday, March 26 at Williams Arena in Minneapolis. Trailing 45-44, the Jaguars duked it out with top-seeded and defending state champion Hayfield down the stretch before falling 51-49. At halftime, the Jaguars led 29-21 and held the lead for over 16 of the game's first 18 minutes. 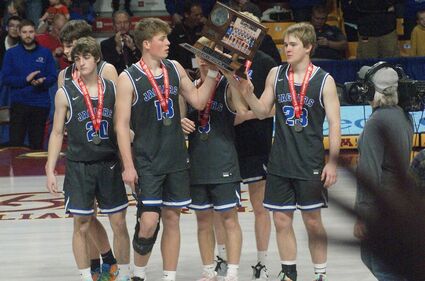 The Jaguars accept the Class 1A state runner-up trophy at Williams Arena on March 26.

B-B-E finishes 28-5 overall with the school's seventh Central Minnesota Conference title and a second state runner-up finish, the first coming in 2010-2011. B-B-E was CMC champion for six straight seasons from 2008 through 2014. They've played in the last five sub-section championship games and have played in four state tournaments.

To get to the state finals, the Jaguars upended No. 3-seeded New Life Academy of Woodbury 55-53 on Friday in Minneapolis.