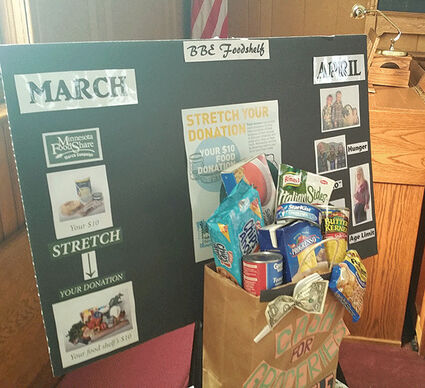 Shown is an example of the numerous March food shelf donation displays set up throughout the Bonanza Valley area at churches and businesses during what was a highly successful donation campaign. Featured here is the display at West Lake Johanna Lutheran church in Gilchrist Township. The local community should be proud of this display of much-needed generosity.

The Belgrade-Brooten-Elrosa Area food shelf wishes to thank area congregations, businesses, organizations, and individuals for $20,368 plus 370 pounds of food donated during the 2022 March Campaign.

This campaign concluded on April 10, and because of it, our local food shelf will be able to leverage extra dollars from Minnesota Foodshare over the coming months on totals collected during the March Campaign.

The full story appeared in print in the April 21 issue of the Bonanza Valley Voice newspaper.