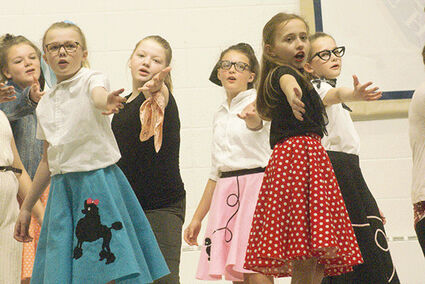 Students shown singing the Beatles' hit song "I Wanna Hold Your Hand" during the elementary music program on May 4, 2022 in Brooten.

Students in grades kindergarten through fifth grade at Belgrade-Brooten-Elrosa elementary school performed their spring music concert on Wednesday, May 4 in front of a packed house in the school gymnasium. The music and dialogue celebrated the history of Rock N' Roll with music from singers such as Little Richard, James Brown and Elvis Presley. Below is a video clip from the start of the show.

Numerous photos from the band concert and music program were published in the May 12 issue of the Bonanza Valley Voice newspaper.