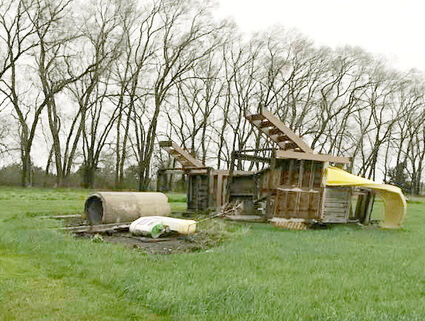 This play set was tipped over on a rural Pope County location by high-level winds and possibly tornado-like activity approximately 1.5 miles north of Sedan on Thursday, May 12. A fish house was destroyed at this same location after the wind picked it up in the air and smashed it into the ground.

On the evening of Thursday, May 12, a significant thunderstorm, wind storm and rain storm passed over the Bonanza Valley area with brute force. In some areas, tornado-like activity was reported near Lake Johanna, Padua and other areas.

Just shy of 7 p.m., the warning sirens began blaring in Brooten, and they worked exactly as intended.

For a period of 10 minutes after the sirens began, the wind blew at around 10 to 15 miles an hour as a dark, ominous cloud developed to the southwest. In a matter of seconds, the wind picked up with straight-line winds of at least 60 miles an hour, sending all types of debris in the air. Suddenly, it became very, very dangerous to be outdoors to the extent that life would be at risk.

Reports by the Brooten Fire Department suggest that everyone in town heeded the warning, and it seemed like a "ghost town" as the storm bared down.

Families in the countryside saw other types of damage to buildings, and an adult daughter of a dairy farm family in the Padua/Sauk Centre area was severely injured when a calf hutch was picked up by the wind and struck her. She is in tough shape right now and fighting for her life. We are not able to share their identity at this time.

A tornado touchdown was confirmed near Murdock. Other tornado-like activity was reported in rural Brooten, Padua and Sauk Centre.

Near Glenwood, over a dozen rail cars were tipped off the train tracks just east of town along Highway 55. On Friday morning, May 13, crews were working to put them back together on the tracks.

Power was lost at both New London-Spicer schools in New London as well as Minnewaska Area high school in Minnewaska Township, rural Starbuck. Classes were cancelled at both school districts for Friday, May 13.

A motorcyclist died on Thursday night south of Benson. Also, a man died northeast of Blomkest when he was crushed under a grain bin. (Both items reported by the West Central Tribune in Willmar.) The man killed by Blomkest was a trained storm spotter and a volunteer fire fighter with the Blomkest fire department who was sheltering in his truck by the grain bin. This is very, very sad news.