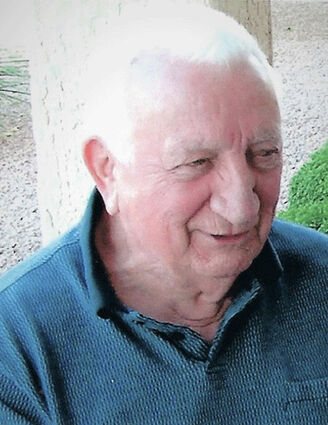 Richard was born in Belgrade in 1928, the fourth child and eldest son of John and Eleanor (Quisberg) Boie. He attended schools in the Belgrade area and was a member of the Belgrade High School class of 1946. After high school, he traveled with friends to California. While in California, he enlisted in the United States Army in 1948, and was stationed in Korea, Occupied Japan, and at various locations in the United States. Following his honorable discharge in 1954, he attended Milwaukee School of Engineering in Milwaukee, Wisconsin.

He married Florence Gerwing in Milwaukee in 1955.  They made their home in Milwaukee, and later moved to Sussex, Wisconsin, where they lived for more than 30 years. Richard worked at the United States Postal Service in Milwaukee for 36 years, initially as a letter carrier and later as an electronics technician, maintaining letter sorting machines and other equipment.

After retirement, he and Florence moved to Sun City West, Arizona.  During the winters, they welcomed friends and relatives to their home in Arizona, and faithfully attended the high school basketball games - whether home, away, or even out of state - coached by their son, John. In the summer, they spent time with family and friends in Minnesota, Wisconsin and Maryland. His family was the light of his life, particularly his two grandchildren, whom he loved dearly.

After Florence's death in 2011, Richard purchased a home in Belgrade and continued to divide his time between Minnesota and Arizona. He was always happy to have friends and family drop by for a few minutes, visit for the day, or stay for several weeks. In both Belgrade and Arizona, he enjoyed going to family gatherings; visiting with his neighbors; going to home or away high school football, basketball or baseball games; and working on his yard and house.

Richard loved to travel, and enjoyed long-distance cross-country drives his entire adult life, whether accompanied by family members, friends, or alone. He would carefully plan routes with new sights in mind, family and friends to visit, and/or the casinos on the way. Memorable trips included those between Milwaukee and Glacier National Park with Florence and their young children in the 1950 Mercury that often needed his mechanical abilities and ingenuity to patch up sufficiently to complete a trip. Another eventful drive involved circling Vienna, Austria, along the historic "Ring Street," fruitlessly searching for a parking space. After finally happening upon an open space and exiting the rental car, several men armed with large guns suddenly appeared and firmly said that he could not park in the space designated for the representative of OPEC.

Richard made his final solo cross-country drive between Belgrade and Arizona in February of 2021. The two-day trip included several inches of blowing snow in Wyoming; he described it afterwards as having been "kind of fun."

He was a wonderfully patient teacher, whether explaining the mysteries of the binary system of mathematics and how computers work to a 10-year-old, or teaching family members how to drive. Richard could also repair almost anything, using whatever was at hand.

The family wishes to express a heartfelt "thank you" to the Belgrade Nursing Home for their professional care and kindness to Richard and our family following Richard's stroke.