Memorial service information has been added 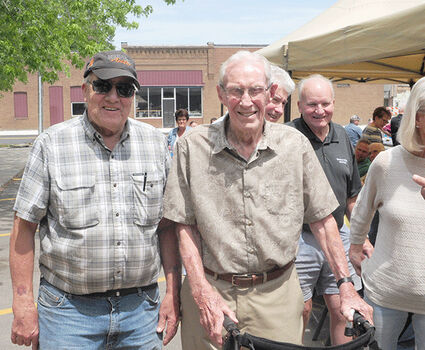 On June 17, 2021, John O. Bohmer is pictured (center) with Ronald Erickson at the 100th birthday party for Bohmer in the parking lot of the Bonanza Valley State Bank.

A storied chapter in the history of the town of Brooten has come to a close. John O. Bohmer has passed away, as he was reunited with his first wife, Joyce, dying peacefully at his home in Florida on Wednesday, September 7, 2022. Bohmer has served as chairman of the board of directors of Bonanza Valley State Bank from 1954 until his passing.

Bohmer is survived by his second wife, Nona, and his daughter, Theresa (Bohmer) McDonald, plus other extended family. Preceding him in death were his two sons, Donald Richard (passed away March 17, 1949 from leukemia) and Owen John (passed away October 12, 1963 from an automobile accident).

John and Joyce (Sandvig) were married on June 1, 1941. She passed away November 26, 2000. During their marriage, they were involved in just about everything imaginable in the community, not the least of which was overseeing operation of the State Bank of Brooten (today known as the Bonanza Valley State Bank). Joyce also was an agent and the manager of Bohmer Insurance Agency for 20 years (1955-1975).

(VIDEO) Shown is a video clip recorded at the 100th birthday party of John O. Bohmer on June 17, 2021 in the parking lot of the Bonanza Valley State Bank.

A video is posted here with footage from Bohmer's 100th birthday party on June 17, 2021 in Brooten.

*Update: below is the memorial service information.

John O. Bohmer, age 101, of Brooten, MN and Palm Bay, FL, died Wednesday, September 7, 2022, at his Palm Bay, FL residence under the care of hospice and with his family by his side. A memorial service will be held on Monday, September 26th at 11:00 A.M. at Trinity Lutheran Church in Brooten, with Pastor Jean Megorden officiating. Visitation will be at the church on Sunday, September 25th from 2:00 P.M. until 5:00 P.M. and will resume there on Monday beginning at 10:00 A.M. and running until the time of service. Inurnment will be in Trinity Lutheran Cemetery in Brooten. Arrangements are with Hoplin-Hitchcock Funeral Home of Brooten. A full obituary will be published in an upcoming edition.