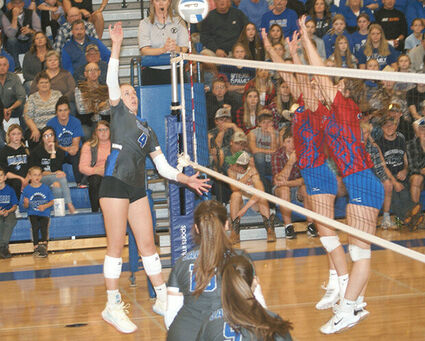 Brooklyn Fischer knocks over an attack for a kill against K-M-S blockers during the Sub-Section 6A-South semifinals in Brooten on October 28.

The Belgrade-Brooten-Elrosa volleyball team has two playoff wins to their credit after earning back-to-back sweeps in Sub-Section 6A-South play. They now head to a sub-section championship match for the 20th time in program history. The Jaguar volleyball program began in the fall of 1988, during a season when the Jaguars played in their first and only season in the Prairie Conference. They have played in the West Central South Conference and now the Central Minnesota Conference since 1999. B-B-E's volleyball team has earned 18 sub-section finals berths since 2000.

Last Friday in the second round of subsections, the Jaguars won in three sets against a scrappy, hustling and determined Kerkhoven-Murdock-Sunburg Fighting Saints squad. The sub-section semifinal border battle featured a near-packed gymnasium with deafening crowd noise at times. It was playoff volleyball at its best on our home court! The Fighting Saints play in the completely stacked, brutally tough Camden Conference and have seen just about everything there is to see on a volleyball court. That showed all night, as they did not back down from B-B-E's relentless attack. The Jaguars had to elevate their level of play all night long, and they did.

The Fighting Saints finish 12-17 overall. They had eight seniors on the roster.

B-B-E's 20th sub-section final appearance in 35 seasons of Jaguar volleyball is tonight (Thursday, November 3) at approximately 7:30 p.m. at Fergus Falls high school. The opponent will be No. 2-seeded Brandon-Evansville, who sports a 17-10 overall record. The Chargers finished 7-2 (third) in the Little Eight Conference behind Hillcrest Lutheran Academy and Clinton-Graceville-Beardsley.

As always, you can read more on Jaguar Sports and keep up on near-daily updates at the newspaper's Jaguars Sports extended coverage blog: http://bbejaguars.blogspot.com. **November 7 UPDATE: the sports blog has been fully updated with state tournament information.