Show dates are November 18, 19 and 20 at Olson Auditorium 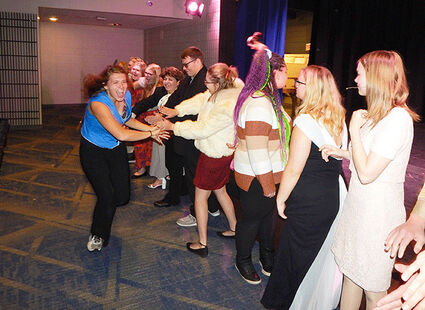 Following the musical's sneak preview of 'Anastasia' for middle school students on November 16, senior cast member Tiyana Schwinghammer runs through the line of musical students in a row of high fives at Olson Auditorium.

The Belgrade-Brooten-Elrosa Theater company will perform the fall musical Anastasia at the high school's Olson Auditorium in Belgrade THIS weekend!

This will be a tremendous musical to take in, with some cast members taking three to five roles. Cast members have put tremendous effort into learning their roles and adding unique expressions, mannerisms and personality to their parts in the musical.

Show dates are Friday, Saturday and Sunday, November 18, 19 and 20. Show times for the first two nights are 7 p.m., while the Sunday show starts at 5 p.m. The show runs approximately two hours including one 15-minute intermission. Concessions will be available at intermission.

(HD VIDEO) A musical sneak preview was performed on November 16 for middle school students; shown is a clip from a scene in Act I.