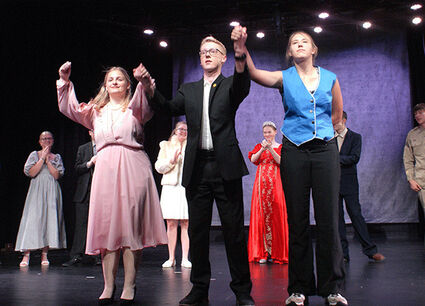 *Saturday afternoon update: as of 2 p.m., they have 61 pre-sale tickets sold for tonight's show. There's capacity to seat around 250 at Olson Auditorium.

A gripping story played out from the depths of the communist, totalitarian Russian Empire to the grand exhilaration of Paris in the 1920s while the audience got to know the story of the Grand Duchess Anastasia Nikolaevna and her journey into her mysterious past.

A cast and crew of 20 students at B-B-E high school have been working since the last week of August for this night. A last-minute move of Dominic Ramos from crew to the cast role of Gleb took place due to illness, and the show did not miss a beat. The character of Gleb was central to the storyline, so this was a truly difficult feat to pull off by the cast, crew and directors.

Musical veterans Tia Nelson (Anya), Savannah Finken (Countess Lily), Paige Klaphake (Dowager Empress) and Dylan Hirman (Dimitry) gave astounding performances in their roles. The price of admission would be worth seeing any one of those four in action. A handful of cast members with 1 to 2 years of cast experience plus a lengthy list of newcomers also gave wonderful performances in their first time on the theater stage at B-B-E.

Altogether, 'Anastasia' features 26 scenes, including 14 in Act I and 12 in Act II. The full run time just eclipsed 2 hours and 30 minutes including a 20-minute intermission.

Video is posted below on this web article.