Playoff opener won by sweep, on to semifinals 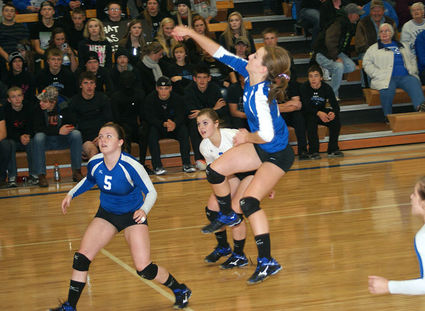 Karlee Kern flies high while earning a back-row kill on this attack.

The Belgrade-Brooten-Elrosa Jaguars volleyball team came out on a mission to start the Sub-Section 5A-West playoffs and methodically took apart Atwater-Cosmos-Grove City in a 3-0 sweep on Thursday night.

In front of a packed hometown crowd, with the B-B-E student section in a self-imposed "black out", the Jaguars jumped all over the Falcons while bolting to a 13-3 lead in game one.

Head coach Kevin Weller knows that's exactly what's needed each and every night they can continue playing in the sub-section tournament.

"We know we have to bring our 'A' game every night. We are going to get every opponent's best shot as we try to keep this going," he said following the match.

After A-C-GC got a couple side outs, the Jaguars turned it up another notch with a 6-0 run while getting a kill and ace block from Morgan Gronli plus a kill from Karlee Kern to make it 22-5. Gronli got another kill late in the game, which ended as a 25-9 win for the Jaguars.

After trailing 5-4 early in game two, the Jaguars surged ahead with a diverse attack and led 12-6 on an ace block from Ally Gruber. Two ace serves from Kern made it a 17-9 lead. After A-C-GC cut the lead to 20-17, the Jaguars stomped all over the Falcons while scoring the game's final eight points in a 25-17 win.

After the win, Bailey Buchholz, senior defensive specialist, commented about the team's great play and gave some insight on why the Jaguars are doing so well this season, "I think we are so close as a team. We hang out off of the volleyball court. We really enjoy having team suppers. We hope to get far this year, but we have to take it one match at a time."

In the video, you can watch the opening minutes of the playoff opener.

To make a deep run, Buchholz gave some thoughts on what the team needs to work on, "We need to keep tightening up our defense and cutting down on the errors. We realized that we have to come together as a team, and at crucial times in a match we have to flow to the ball."

Tessa Halvorson had 38 set assists, and Kern led the defense with nine digs. Hitting a whopping 54.5 percent on her attacks was Ashley Trustheim, who notched 13 kills. A complete set of match statistics will be published in next week's Bonanza Valley Voice newspaper.

Next: the sub-section semifinals at Long Prairie-Grey Eagle high school on Saturday, Oct. 31 (Halloween) at 6 p.m. The opponent will be Browerville/Eagle Valley, champions of the Prairie South Conference. The B/EV Tigers are 21-3-2 overall after beating Swanville 3-0 in their quarterfinal match. Pack the car pools and get everyone you know up to Long Prairie on Saturday night!