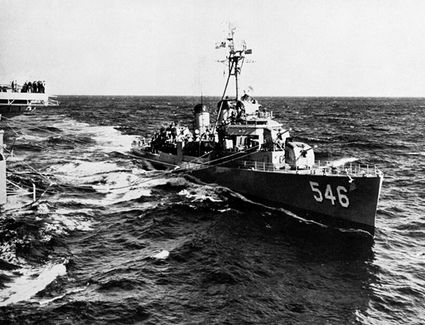 If I had endless time and many free hours each day, I'd write about every veteran I could find in our area. Instead, with limited free time in the past two weeks, I decided to focus on the oldest veterans I could talk to and go from there. This brings me to veterans who served in World War II or the Korean War. This week I have the honor of sharing stories from Donnie Beyl and John O. Bohmer, both certainly no strangers to the Bonanza Valley area. Other veterans will be featured next week and also hopefully in future issues in future months.

While talking to Donnie, he was quick to point out that his service in World War II was tied completely to the USS Brown (DD-546), a destroyer in the U.S. Navy.

"I was on Brown from the time it left Pearl Harbor in November 1943 until the time it returned to San Deigo in November 1945," recalled Beyl as he gave the complete timeline of those two years of service. "I was a member of the Fifth Fleet, and we were on the outer flank. The carriers were in the middle, with the battleships around them. Then a ring of cruisers. And we (destroyers) were on the edge."

To see the rest of the story, be sure to subscribe to the Bonanza Valley Voice newspaper.