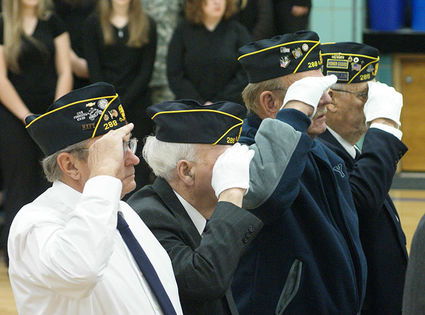 Students at Belgrade-Brooten-Elrosa, as young as the preschoolers on up through seniors, took in Veterans Day programs on Wednesday at the elementary and high school buildings. The B-B-E senior high band and choir performed at both events.

At the elementary school, sixth grade students recited information about Veterans Day while the Pope County Men's Chorus sang a number of songs. Members of the Brooten American Legion Post #288 and the Brooten Legion Auxiliary were seated up front during the program. Winners of the Voice of Democracy contest gave their speeches at both the elementary and high school.

At the high school in the afternoon, members of the Belgrade V.F.W. led the program.

Shown is the first of two video clips from the elementary Veterans Day program.

Veterans Day originated as “Armistice Day” on Nov. 11, 1919, the first anniversary of the end of World War I. Congress passed a resolution in 1926 for an annual observance, and Nov. 11 became a national holiday beginning in 1938. Veterans Day is not to be confused with Memorial Day–a common misunderstanding, according to the U.S. Department of Veterans Affairs. Memorial Day (the fourth Monday in May) honors American service members who died in service to their country or as a result of injuries incurred during battle, while Veterans Day pays tribute to all American veterans–living or dead–but especially gives thanks to living veterans who served their country honorably during war or peacetime. SOURCE: history.com

Since 1975, Veterans Day has always been observed on November 11.