Jaguars are 3-0 in the Central Minnesota Conference 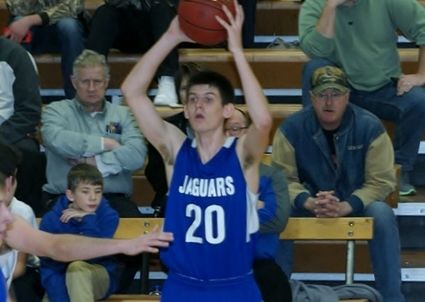 Austin Trustheim looking for a pass on the wing against HL-W-W.

After winning just three games all season in the Central Minnesota Conference last year, the Belgrade-Brooten-Elrosa boys' basketball team is off to a 3-0 start in the league after winning a thriller by a 61-59 score over visiting Howard Lake-Waverly-Winsted on December 11.

The 3-0 mark in the CMC has B-B-E sitting in a first-place tie with Eden Valley-Watkins. In second place in a tie are Pierz and Maple Lake.

The Jaguars (5-1 overall) had an early 10-7 lead with 15:20 left in the first half after Austin Trustheim canned a three-pointer. The Lakers then went on a 10-0 run to gain control and forge a seven-point lead. They continued pouring it on, helped by numerous three-pointers (seven overall in the first half) and went into halftime with a 39-29 lead.

(Video) Tanner Heinsius cans a three-pointer in the second half to give the Jaguars their first lead since the game's opening minutes against HL-W-W.

Badly needing to do a better job on the defensive glass, the Jaguars regrouped at halftime and came out firing in the second half. Austin Trustheim knocked down a shot just 15 seconds in, Ryan Illies scored in the paint and Derek Wiener hit a free throw and then a three-pointer with 15:10 left to cut the HL-W-W lead to just one point.

The lead changed hands a couple more times before the Jaguars built a four-point lead for the first time in the game at 52-48 with 2:47 left on a free throw by Trustheim.

On three possessions the Jaguars built six-point leads before withstanding a late rally by HL-W-W in the final 37 seconds.

Next for the Jaguars is a tough home game against Pierz next Thursday, Dec. 17. The Pioneers are 2-1 overall and 2-1 in the CMC after beating Kimball Area 84-58 tonight. They travel to neighboring rival Little Falls next Tuesday before traveling to Brooten two nights later.

The Lakers, who lost their fifth straight game after opening the season with a win, host Mayer Lutheran next Tuesday.