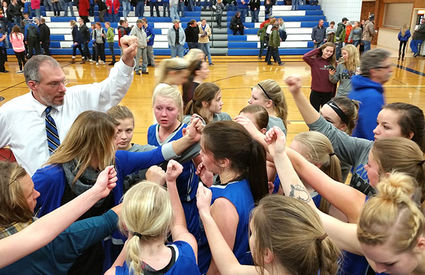 The B-B-E girls' basketball team will have plenty to work on in order to prepare for a tough January schedule after the Christmas vacation is complete.

Poor free throw shooting spelled doom for the Belgrade-Brooten-Elrosa girls' basketball team as their undefeated start to the season came to and end in a 56-50 loss at Minnewaska Area on Tuesday last week.

Last week Thursday the Jaguars beat Atwater-Cosmos-Grove City in Grove City by a score of 66-47 to get their eighth win of the season.

With all teams having two games under their belts in conference play, the Jaguars sit in a three-way tie for first place at 2-0 with Kimball Area and defending champion Eden Valley-Watkins. In a tie for fourth place are Holdingford and Howard Lake-Waverly-Winsted (1-1 each). Tied for sixth place (0-2 each) are Maple Lake, Pierz and Paynesville Area.

Also noteworthy is that the bottom five teams in the CMC have a cumulative record of 8-28, while the top three teams are 20-5 when their overall records are added together.

The Jaguars lead the CMC with a scoring average of 65.3 points; their defensive average also leads the CMC at 39.8 points given up per game. The next best scoring average comes from Kimball Area (53.9 ppg) and then Holdingford (49.1 ppg). The second-best defense in the CMC is with Holdingford (43.9 ppg given up) and then Kimball Area (46.6 ppg given up).

To read the full story, refer to the December 24 issue of the Bonanza Valley Voice print edition.