So what's so big about speech? 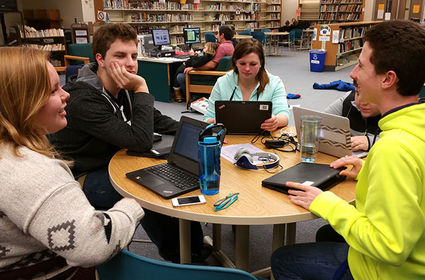 Speech team members gather at the high school media center to discuss ways to increase turnout for the upcoming 2016 season.

During this century, speech has been to Fine Arts at Belgrade-Brooten-Elrosa as much as volleyball has been to the Jaguar athletic program. It is indeed a program unto itself.

That came about by no accident, with B-B-E speech coaches through the years building turnout into the mid- and upper-30s and over 40 in some seasons while cranking out conference and sub-section team championships left and right while having dozens of students earn trips to the State Speech meet each April.

Interviews of past speech team members yielded little nuggets like this: while attending some of the more prominent speech meets in the state such as Moorhead and Eden Prairie, students from competing schools would sit in awe as they saw the school bus from B-B-E pull up to the curb and wave after wave of kids would stream into the school.

"Where are you from?"

"Where's that? How do you get so many kids on your team? Your school is really that small? How can that be!"

To read the full story, get a copy of the January 7 issue of the Bonanza Valley Voice newspaper.