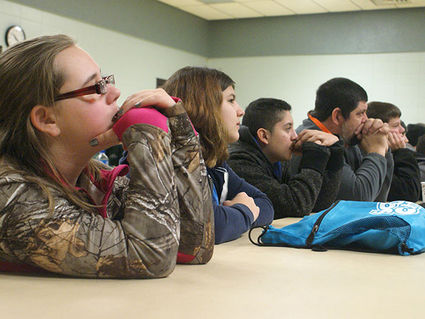 PHOTO BY RANDY OLSON At Central Lakes College in Staples on Saturday, members of the B-B-E Robotics team watch closely as a video played describing the 2016 challenge for the upcoming regional contest in Duluth.

The 2016 FIRST Robotics Competition Kickoff was held on Saturday at the campus of Central Lakes College in Staples. Attending were area schools, including seven members Belgrade-Brooten-Elrosa's Robotics team.

The FIRST (For Inspiration & Recognition of Science & Technology) competition begins with a six-week long "build" period where robotics teams across the area design and build a robot that will meet the requirements of a challenge competition. This year the competition is called FIRST "Stronghold" with a Renaissance Festival-type them. B-B-E's Robotics team will unite with other teams as they attempt to navigate robots through a unique maze of obstacles and challenges while trying to destabilize and ultimately take over a castle-like tower.

In a video introducing students to the 2016 challenge, Dean Kamen gave a keynote speech. Kamen is an American entrepreneur and inventor best known for his invention called the Segway PT, an electric, self-balancing human transporter with a computer-controlled gyroscopic stabilization and control system.

Kamen said, "We want to get kids hungry for science. In the future, the workforce will have an emphasis on a worker's ability to adapt to changing skillsets."

"We want aspirational after-school activities that steer a kid's interest towards math and science."

B-B-E's Robotics team has about 20 students and will work up to four days a week from now through February 21. Stay tuned for more on the team in future issues!