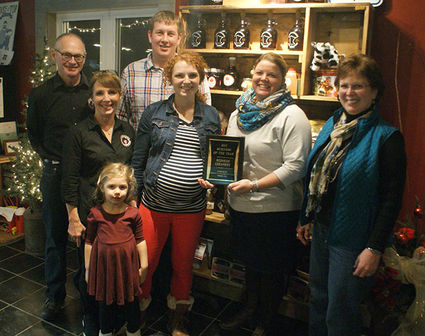 The Redhead Creamery is the 2015 Brooten Business of the Year, an award announced on Saturday, January 16 from the Brooten Commercial Club at their annual party and meeting.

Commercial Club president Jana Zenner prefaced the award by these remarks, "They have some ridiculously good service, good food, and have been on numerous television shows and magazines. They've been in competitions for best artisan cheeses. We're very excited that they are part of the Brooten community and excited that they continue to grow their business."

After accepting the plaque, Alise Sjostrom gave a few words. She is the force behind her family's cheese plant, located between Brooten and Padua on the Jerry and Linda Jennissen dairy farm.

"Thank you. We are very honored. This is our first big award like this. We are always excited to bring people out here, especially those who are part of our community," she said.

"We've been in business for almost two years. We've been making cheese just a little over one year now. We make a variety of cheese, primarily our aged cheddar called Lucky Linda as well as our cheese curds. We also make the Little Lucy Brie, and we'll be releasing more cheese out of our store in the near future.