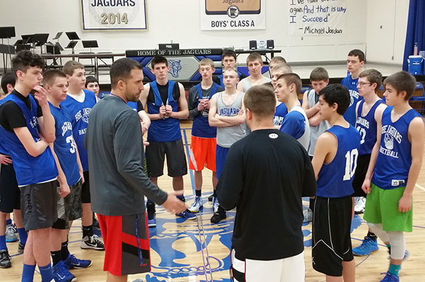 The boys' basketball team gathers before practice the day after winning in five overtime sessions at HL-W-W on Jan. 28.

Last Thursday at Howard Lake-Waverly-Winsted, the Jaguars played in just the eighth five-O.T. game in the history of the state of Minnesota. Clearly not a game for the faint of heart, the Jaguars managed to put the Lakers away in the fifth overtime by outscoring the home team 15-10 in a 73-68 Central Minnesota Conference win.

The record for basketball overtimes in Minnesota is eight, set in 1983 in a Central Lakes Conference game between St. Cloud Tech and Little Falls.

The five-game winning streak came to an end on Saturday when Browerville/Eagle Valley defeated the Jaguars 87-52.

Now 13-7 overall and 7-3 (tied for second with Pierz) in the CMC, the Jaguars look to take hold of second place alone when they travel to Pioneers territory on Friday this week. Red-hot Pierz is 10-8 overall and winners of six of their last seven games.

The Jaguars host Holdingford (14-5, 6-3) in an important rematch next Tuesday, and next Thursday they have a huge game at Ortonville (12-4) that will have subsection implications as the February 17 seeding is fast approaching.