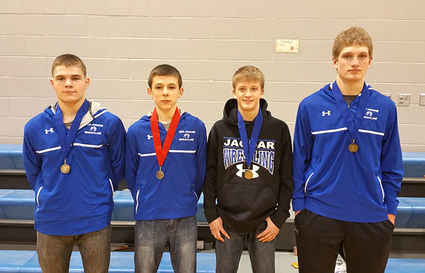 Two team members going for the first time and two with one trip already under their belts on the B-B-E Jaguars wrestling team will compete at this week’s Class 1A state tournament after battling through a strong weekend of competition at the Section 5A individual tournament.

Repeating trips to state are Tyler Bents and Colby Schramel, while heading to state for the first time are Canon Swanson and Ben Thompson.

(HD video) The awards ceremony at the Section 5A individual tournament on February 20 at Long Prairie-Grey Eagle high school.

The Class 1A state individual wrestling tournament begins at 1 p.m. on Friday, Feb. 26 at the Xcel Energy Center in St. Paul. Action continues with the quarterfinals and wrestlebacks later that night. The tournament concludes on Saturday.