B-B-E prevails for second time this season over Hancock 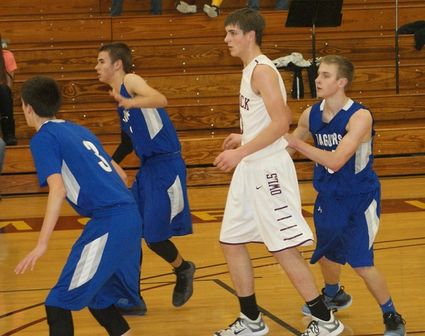 The Jaguars shown applying defense against Hancock's Collin Brown, one of just three seniors on the Owls roster.

Riding a strong second-half performance in Saturday's Sub-Section 6A-South semifinal round game in Morris, the Belgrade-Brooten-Elrosa Jaguars came out on top of a 17-win Hancock Owls team to earn their second straight trip to the subsection finals and third in the last four years (13th overall).

Trailing for most of the first half, the Jaguars got key shots from Derek Wiener and Tanner Heinsius in the last 30 seconds. Heinsius knocked down a three-pointer standing three feet beyond the arc with just two seconds on the clock to put the Jaguars ahead 29-27 at the break.

The Owls, riding a four-game winning streak while also winning seven of their last eight contests, tied the game at 29-29 and 31-31 before the Jaguars began pulling away in the second half.

Heinsius and Jacob Tensen then hit key free throws in the final minute to help preserve the lead.

Now 15-12 overall, the Jaguars will have their hands full in the next round of playoffs when they face state-ranked (No. 9 in Class 1A) Battle Lake for the Sub-Section 6A-South crown. The finals will be on Monday night, Feb. 29, at 7 p.m. back at Jim Gremmels Court on the campus of the University of Minnesota-Morris.

Battle Lake defeated fifth-seeded West Central Area 64-52 in the other semifinal game in Morris today. The Battlers are 22-6 overall and have lost just two games since Jan. 8: a 71-49 loss to St. Croix Lutheran on Jan. 30 and then a 44-41 loss to visiting Hillcrest Lutheran Academy on Feb. 11.

St. Croix Lutheran is 25-2 overall and the top-ranked (QRF) team in Class 2A. HLA is 26-0 and a favorite to win the Sub-Section 6A-North title and earn a trip to the section finals that are set for March 4 in Moorhead.

(HD video) From the final minutes of the first half against Hancock.

Rockford 71, Eden Valley-Watkins 65 (the Eagles hopes for a state tournament trip are snuffed out by the Wright County West co-champion Rockets)

Annandale 65, Maple Lake 49 (Cardinals are the top seed, while the Irish were the No. 5 seed)