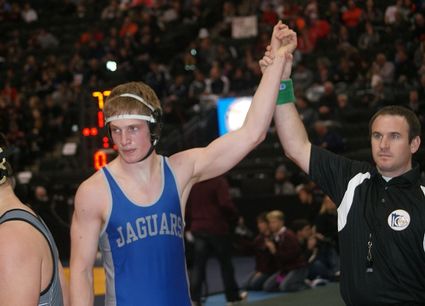 Belgrade-Brooten-Elrosa's senior Ben Thompson, a wildly talented three-sport athlete, earned a bronze medal with a third-place finish at the Class 1A state wrestling tournament this weekend.

Thompson, seeded seventh in the 195-pound division, went 1-1 on the first day of the tournament and had to get to the third-place match "the hard way".

On Saturday at Xcel Energy Center in St. Paul in the wrestlebacks, Thompson started with a win by a 1-0 decision over junior Kieran Johnson (27-16) of Barnesville. Then in the consolation semifinals, Thompson defeated senior Lukas Trio (33-13) of Maple River by a 3-1 decision in overtime.

In the third-place match on Saturday night, Thompson faced junior Reid Seelhammer (32-10) of Dover-Eyota and won a 3-0 decision to bring home the bronze medal. Thompson's final season record was 33-4, which included a 5-1 record at the state tournament.

Two other Jaguars earned places on the medals stand for "championship Saturday" at the X. Canon Swanson, an eighth grader, took sixth place at 106 pounds and had a final season record of 30-8 overall. Colby Schramel, a senior, finished sixth in the 152-pound division and 34-7 overall.

Read more coverage of the Jaguars at the state wrestling tournament in the upcoming issue of the Bonanza Valley Voice newspaper.