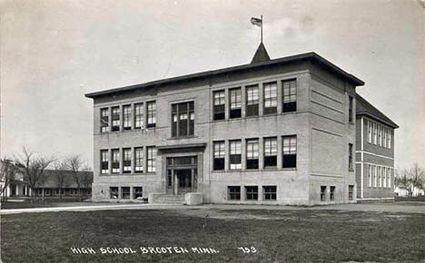 I doubt anyone who sees this picture will recognize it without looking at the words etched at the bottom. Shown is the Brooten school building (1st grade through 12th grade) taken between 1912 and 1933. What can be seen is the west-facing wing, with the "high school" wing in the background. The high school wing was a wooden structure built in 1898 and torn down in 1934. The brick "elementary" wing was built in 1912 and stood until 1994.

In 1934, when the wooden high school structure was torn down, it was replaced by a new high school wing that included a full gymnasium / auditorium with the traditional two-level seating area that seated about 400 people.

Finally, between 1950 and 1952, the school building got a complete makeover with multiple rooms added, including rooms dedicated to Home Economics, band and Industrial Arts. A modern cafeteria was also added in the bottom level of the west wing.

I feel there is little doubt, if any, out there that currently the Belgrade-Brooten-Elrosa school district is blessed to have two modern, up-to-date school buildings. Especially buildings that are paid off!! Sure, who wouldn't love to be able to walk the halls of the old Brooten school just for the sake of walking them? I know I would! 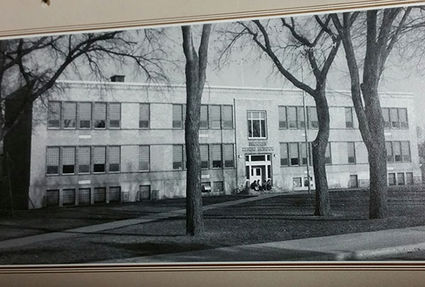 Shown is a photo from the late 1970s from the west view of the Brooten high school.

Look at it from the perspective of what is happening in rural Minnesota: many rural schools are either in the process of adding on to or remodeling their school buildings; some have recently "bitten the bullet" and have many years of burdensome debt to pay off. Money well spent? Yes, of course. But here at B-B-E we just have to maintain the buildings we have...and not worry about getting permission from taxpayers to add to the existing campuses with more brick-and-mortar construction.

Note: I'd like to start gathering stories / memories that former Brooten High School graduates have of the old school that was torn down in 1994. If nothing else I want to archive them as a permanent record of the school. Finding photos of the school would be fantastic, especially from prior to the 1950-1951 remodeling and additions. If you have any input here or anything to share, feel free to send your memories to: bonanzavalvoice@tds.net.

At my core, I'm a history buff. And local history is the best there is!