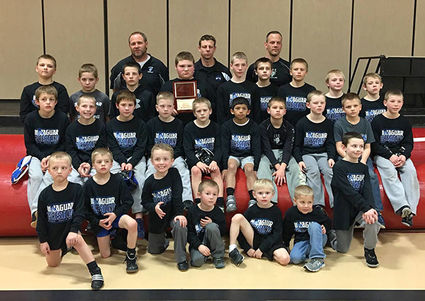 For the third year in a row and the third time in school history, the Belgrade-Brooten-Elrosa youth wrestling Jaguars will compete at the state tournament.

To get to state, the Little Jags battled on Saturday (March 12) at Pierz, the host of the Region IV Northland Youth Wrestling Association (NYWA) K-6 tournament. When the dust settled, the Jaguars qualified for state by taking fourth place out of 13 teams.

In 2014, for the first time ever, the Jaguars earned a trip to state by placing sixth out of 11 teams at the Region IV tournament. Last year the B-B-E youth wrestlers took fourth place out of 13 teams. The top six teams advance to the state tournament, which draws teams from five NYWA teams across Minnesota.

The full story was printed in the March 17 issue of the Bonanza Valley Voice.