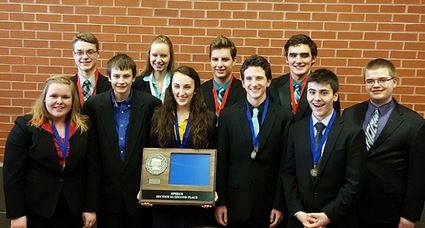 The 10 members of the B-B-E speech team who competed at the Section 5A meet in Annandale on April 9.

For the third year in a row, the Belgrade-Brooten-Elrosa speech team claimed the Section 5A runner-up trophy.

At Annandale for sections on April 9, B-B-E's team brought 10 speech students to compete for a berth in the Class 1A state meet. Out of those 10, eight will advance to the big show, which is April 15 at Lakeview North high school.

Taking the first-place team trophy was Eden Valley-Watkins, who had over 40 entries at the section meet. In third place was perennial speech power house St. Cloud Cathedral, who lost out the race for second to B-B-E on a tiebreaker. According to head coach Lucy Lloyd, B-B-E took first place in more events than Cathedral.

In fact, both B-B-E and section champion EV-W had the same number of individual event champions (three each). In the team scores, EV-W had 39 points, while B-B-E had 31.

Also competing at sections and contributing to the team's score were freshmen Aspen Peterson and senior Andrew Reps.