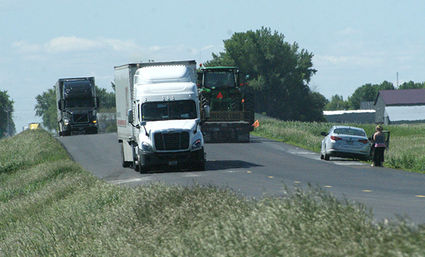 Facing south, this photograph shows where the accident took place north of Elrosa. The turkey barns on the northern edge of Elrosa can be seen in the background.

A fatal accident resulting from a car-vs. semi collision just under a mile north of Elrosa claimed the life of an Elrosa man, according to the Minnesota State Patrol.

The accident happened at 02:38 a.m. on Tuesday, June 7 on Highway 71 between the intersections of 320th Street and the city limits of Elrosa in Lake George Township.

*Note: the family of the deceased man has requested that friends of the family not use his name on social media sites. The accident was less than 10 hours ago, and they are still trying their best to notify family first-hand.

The family at a neighboring farm near Elrosa, located a half-mile from the accident scene, reported that they heard a loud pop at the time of the accident.

The driver of the Chevrolet, whose identity has not been released, died at the scene. A two-year old passenger in the car survived but has serious injuries and is at Hennepin County Medical Center in Minneapolis.

Approximately 13 minutes after dispatch began sending First Responders, the LifeLink helicopter was lifting off from a corn field west of the accident scene with the injured two-year old.

The name the driver of the semi tractor, a 44-year-old male from Grand Island, Neb., has not been released. He was transported to CentraCare Health–Sauk Centre for non-life threatening injuries. His son, age 14, was a passenger in the vehicle and his physical condition is undocumented.

A video clip from the accident site.

No alcohol has been detected in the incident, and the accident remains under investigation.

Assisting at the scene were the Sauk Centre Police Department and the Stearns County Sheriff's Office.

*Update: the Belgrade-Brooten-Elrosa Class of 2006 has set up a memorial fund at North America State Bank in memory of the driver who passed away. Also, a GoFundMe website has been established to help the family with medical and funeral costs. Further information on that will follow in another web article.

Look for a full story with extra information plus additional photos in the June 9 issue of the Bonanza Valley Voice newspaper.