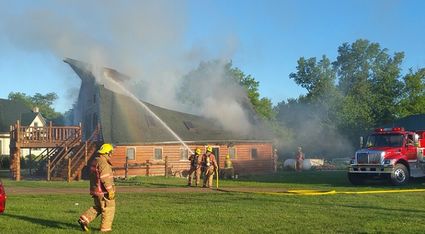 This photo was taken at 06:33 a.m. as the fire departments continued their battle.

A serious three-alarm fire claimed a barn in rural Brooten just before sunrise on Monday, June 6 at the Heidi Kinzler property. Responding to the 911 call were the Brooten, Belgrade and Elrosa fire departments.

Eyewitnesses driving by say the flames from the fire shot high above the barn at one point. By 7 a.m. the fire had been mostly put out, although smoke continued streaming from what was left of the roof.

A short but severe wind and rain storm passed over the area at about 4 a.m., knocking out the power in the neighborhood. It is unclear whether or not the storm caused the fire, but the barn is burnt the worst on the side where the power enters the building.

No injuries were reported to either the property owner or any member of the fire departments.

No other information on the fire was available as this article was posted to the web. It is a sad say for the Brooten area to lose such a beautifully-restored barn.

*Update at 10:34 a.m. = in a press release from the Stearns County Sheriff's office, the time the 911 call on the fire was made was 05:51 a.m. by the property owner. At that time, the dispatch center received a report of a barn fire in North Fork Township. The resident reported waking and seeing that the barn on her farm site was on fire. Deputies and the Brooten Fire Department found the barn engulfed. The fire reportedly started in an attached lean-to.

The Minnesota State Fire Marshal's Office was notified, and the cause of the fire remains under investigation.