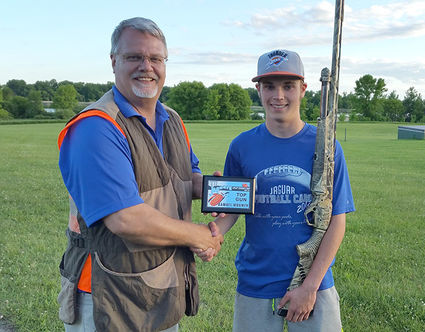 Belgrade-Brooten-Elrosa Clay Trap team head coach Gary Rodgers with Sam Wosmek, a senior who was the team's best shot during the regular season. Wosmek won the Top Gun award on B-B-E's Clay Trap shooting team, which is nearing the culmination of the inaugural season. Shown with the coach, Mr. Rodgers, Wosmek's average score per round (with a best of 25) was 20.3, which also ranked him in a tie for 51st place out of 288 competitors in the conference. In Class 4A, Wosmek's score was 201st best out of 1,230 competitors.