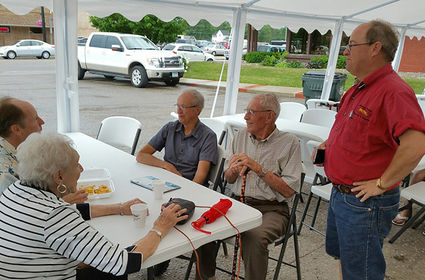 John O. Bohmer gathers with friends and family on June 17 at the bank parking lot for his 95th birthday party.

According to the bank's history, on one very cold February morning in 1894, John Bohmer started for Brooten with his horse and sleigh. After an overnight stop in a haystack, he made it to Brooten armed with cash and the necessary formalities. He opened the "Bank of Brooten" on February 23rd, 1894.

Today Bonanza Valley State Bank is a successful independent small-town bank with assets of over $60 million. (They are a big reason why Brooten still has an independently-owned newspaper, by the way.)

Music and food was in store for anyone who stopped by this afternoon, which was also a chance to honor area dairy farmers for June Dairy Month.