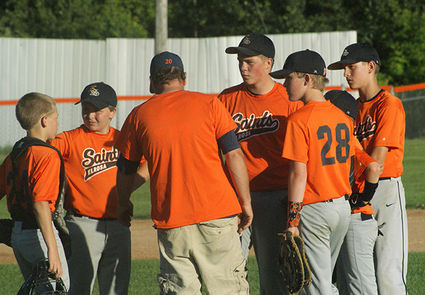 Coach Bauer talks to his infield in a conference during the Farming game on June 29.

The last undefeated teams in the Stearns County League met for a great baseball game in Elrosa on Wednesday, June 29. The Elrosa Saints hosted the Farming Flames in a Little Dipper contest, in which the Flames overcame a 4-2 deficit in the third inning to come out with a 5-4 win.

Farming improves to 7-0 in the SCL standings, while the Saints fall to 5-1.

(HD video) The Elrosa Saints score three runs in the bottom of the third inning against Farming on June 29.

Elrosa trailed 2-1 after the first inning but scored three times in the bottom of the third. Will Van Beck led off with a single, and Blaine Fischer got him to second with a sacrifice bunt. Jackson Peter then drew a walk, and on ball four the ball sailed high as a wild pitch, allowing Van Beck to score from third base.

Luke Dehmer then crushed a two-RBI double deep to center field to put the Saints ahead 3-2. Ryan Schwinghammer then clubbed an RBI-triple to score Dehmer and put Elrosa ahead 4-2.

Farming then scored once in the top of the fourth and twice in the fifth and held on for the close win.

Check out video from the third inning where the Saints pulled ahead.

Up next for Elrosa's Little Dipper baseball team: the Saints have a make up game with Regal on Wednesday, July 6 in Elrosa at 6:30 p.m. They travel the following night to St. Martin for another makeup contest.