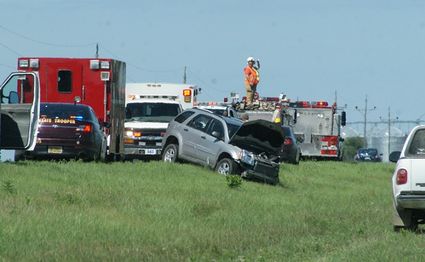 Shown is the Chevy Equinox involved in a two-car accident by Belgrade on July 30.

A manhunt is underway in the Belgrade area after the driver involved in a two-car accident west of Belgrade fled on foot on the morning of Saturday, July 30.

The accident took place at approximately 10:40 a.m. involving a mid-2000s model Chevrolet Equinox (gray color) and a mid-2000s model Chevrolet Impala (silver color). The vehicles were driving in opposite directions and collided about one mile west of Belgrade on Highway 55. It is unclear right now which directions they were traveling. When First Responders arrived, the Impala was sitting on the north side of Highway 55, on the shoulder, facing east. The Equinox was partially in the northside ditch and on the shoulder facing northeast.

Eyewitness reports say that the Equinox driver was female. It was confirmed that the license plates on the Equinox are Minnesota plates. The Impala driver, who is from the Belgrade area, was male.

Stay tuned for updates. Note: an official preliminary report from the Minnesota State Patrol has not been released as of 15:00.

Update on Saturday evening: the scene has been cleared, but a Minnesota State Patrol officer remains parked at the accident site. No word on if the Equinox driver has been apprehended yet.

Update late on Saturday night: the driver of the Chevy Equinox was found by a farmer in the area. We don't have additional confirmed information on her identity, her condition or the status of any potential charges for fleeing the scene of an accident.