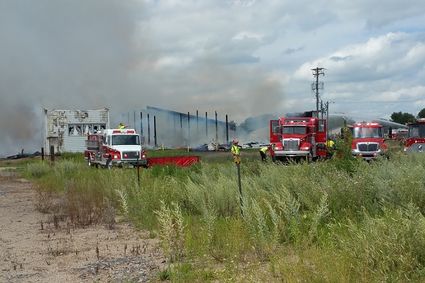 Glenwood Fire Department crews battle the fire on the hot afternoon of July 31.

Just as the Glenwood Waterama parade was about to get underway on Saturday, July 31, a huge fire broke out at an enormous warehouse building on the Glenwood Township / City of Glenwood line east of town. The Glenwood Fire Department trucks responded right away and ended up battling the fire through the rest of the afternoon. They were soon joined by fire departments from Starbuck, Lowry, Sedan, Brooten and others.

(HD video) Shown is a short video clip from the straw fire on July 31 in Glenwood.

The warehouse stored large square bales of straw (and possibly hay) and was a complete loss. It was formerly a warehouse for potatoes.

Unofficially, the cause of the fire appears to be from wet bales heating up and catching fire. Below you can watch exclusive video footage of fire department crews battling the fire. Temperatures were in the 80s at the time, causing concern for the health of firemen. As is standard protocol, Glacial Ridge Ambulance staff were standing by at the scene.