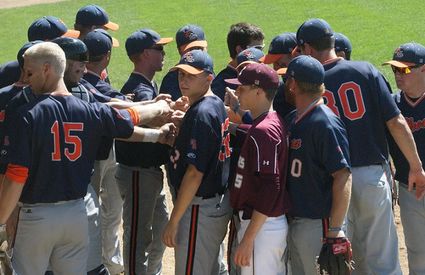 The Elrosa Saints huddle up during rally time against Farming after the Flames took a 1-0 lead in the sixth inning on Saturday in Paynesville.

The Elrosa Saints won two games to begin the Region 15C amateur baseball tournament, both in come-from-behind fashion, as they clinched a berth in the Class C state tournament for the first time since 2013.

Against Farming, the Saints got perhaps the toughest first-round draw of the tournament when they faced starter Brad Mergen on Saturday morning. Mergen cuffed the Saints for seven full innings, not giving up a hit until Pat Illies earned a single in the bottom of the sixth.

The Flames got an RBI-double from Mitchell Thelen in the top of the sixth to go up 1-0.

Elrosa responded with singles from AJ Hadley and Cody Eichers to get two baserunners on one out. Matt Schmitz then knocked a fielder's choice to the shortstop, and Eichers slid into second in time to break up a potential 6-4-3 double play. What resulted was a 6-3 put out throw that put Eichers into scoring position while Ryan Illies, pinch running for Hadley, rounded third and then made it home for a tie score.

Pat Illies then knocked an RBI-single that scored Eichers for a 2-1 lead.

In the top of the ninth, the Flames got a leadoff single, but that runner was caught leading off of first on two outs when shortstop Matt Middendorf caught a low-flying pop fly and shot the ball to Pat Illies at first base for a game-ending double play.

Richmond handed Atwater an 8-4 loss on Friday night and set up a Saturday night showdown between teams that each finished in third place in their respective Stearns County League divisions.

The Royals rocked Elrosa when their first five batters all hit singles with three RBI for a 3-0 lead. Relief pitcher Austin Imdieke came in from left field and took over pitching duties and proceeded to coax a ground out and two pop flies to leave two Richmond runners stranded.

(Video) This video clip shows the bottom of the ninth inning on Saturday, August 6 when Aaron Vogt closed the door on Richmond in a state-qualifying Region 15C contest.

The third game of the Region 15C tournament for Elrosa (16-13 overall) will be on Friday, August 12 at 7:30 p.m. in Paynesville. They will play Regal, the runner-up out of the County Line League. The Eagles beat Meire Grove 5-2 in their first region contest on Saturday, and then on Sunday they beat New London-Spicer 5-1 to earn Region 15C's second ticket to the state tournament. The winner of this Friday night match up gets a pass to the region championship series set for Sunday, August 14.

Paid attendance over Friday, Saturday and Sunday at regions was 2,255!

Read more on the opening weekend of the Region 15C tournament in the August 11 issue of the Bonanza Valley Voice newspaper.

St. Martin 7, Meire Grove 5 (Martins stay alive in an elimination game after getting a walk-off grand slam home run in the bottom of the ninth inning)