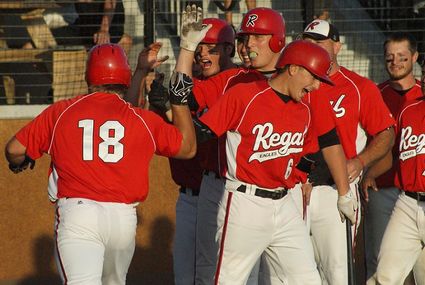 The Regal Eagles celebrate a two-run home run by Nathan Meyer (#18) in the first inning of the Elrosa game on August 12.

The Regal Eagles amateur baseball team is heading to the Class C state tournament for the first time since 1997 and 12th time in team history. From 1985 to '97 they made it to state 11 out of 13 years and now, with an entirely new group of players, they are gunning for some state hardware once again. The Eagles were Class C champions in 1991 and runners-up in 1997.

(HD video) In the bottom of the fifth inning in the Aug. 12 game with Elrosa, the Eagles defense came up big with the Saints leaving two stranded.

Starting with a 5-2 win over Meire Grove on August 6 in the first round of the Region 15C tournament, the Eagles marched their way to the region title contest with additional impressive wins over New London-Spicer (5-1 score) and then Elrosa (4-0 score). They fell 7-6 in a tightly-played contest against Elrosa for the region title and take a 21-9 record into the state tournament. They begin state on Saturday, August 20 at 11 a.m. against the No. 3 seed out of Region 3 at a site to be determined. Hutchinson, Litchfield and Dassel are hosting this year's state amateur baseball tournament.

*Update: Regal drafted Brian Kingery from Atwater and Justin Schroeder from Atwater to add to their pitching battery.

*Update: Regal's state opener will be played in Dassel on August 20 at 11 a.m. Their opponent will be the third-place team out of Region 3, the Shakopee Coyotes. If the Eagles win, their next state game will be on August 27 in Hutchinson against Region 13 champion Hadley at 1:30 p.m. Hadley is located in southwest Minnesota.

Additional coverage of the Eagles will be published in the August 18 issue of the Bonanza Valley Voice newspaper. Also, the Voice has countless video clips from the region title contest featuring great plays made by Regal players that will be edited and posted as time allows this week.