Stung at the last second

B-B-E vs. A-C-GC football opener goes down to the wire 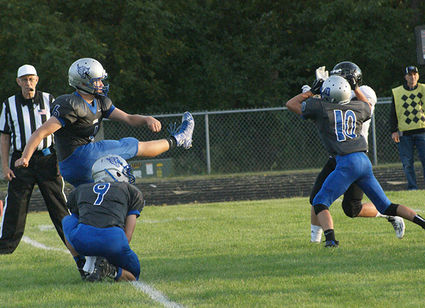 Jacob Weller boots the PAT kick through the uprights in the game's opening seconds to give the Jaguars a 7-0 lead.

Smash mouth football with a dose of aired-out pig skins was the name of the game on Friday night (Sept. 2) for the 2016 season opener between Belgrade-Brooten-Elrosa and Atwater-Cosmos-Grove City.

The Jaguars and Falcons duked it out for four very entertaining quarters of football, with B-B-E drawing first blood when Adam Jaeger ran back the game-opening kickoff for a 95-yard touchdown. Jacob Weller's PAT kick gave the Jaguars a 7-0 lead.

By the end of the first quarter, the Jaguars were looking good with a 13-6 lead. Ryan Illies ran in his team's second touchdown with 3:19 on the clock.

The Falcons cranked it up on defense and offense and took a 28-21 lead into halftime. Neither team scored in the third quarter. B-B-E's Isaiah Gilbert ran in a 14-yard touchdown with 3:49 left in the game. Weller booted another PAT for a 28-28 tie.

(HD video) The National Anthem, starter introductions and the game's opening kickoff are shown in this video from September 2.

A-C-GC then drove 74 yards and kicked a 22-yard field goal in the closing minutes for the 31-28 win. The Jaguars had 1.4 seconds on the clock when they received the final kickoff. The drive back ended at midfield.

More stats will be updated later on Saturday.

Next: the Jaguars travel to Royalton on Friday, September 9 for the second game of the year and the first game of the Mid-State, District 3 schedule. The Royals pummeled New York Mills on Thursday night in a 35-6 win. Don't miss the video attached below that features Jaeger's first touchdown run of the game.