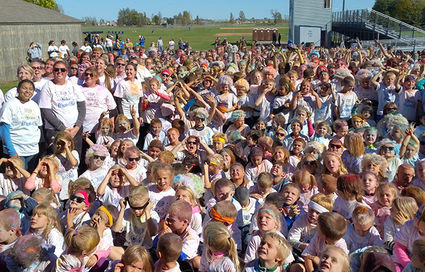 The day turned out to be a spectacular one in terms of moderately good weather along with terrific participation from the students and the community of Belgrade-Brooten-Elrosa for the second annual Color FUND Run, held Wednesday, October 5 in Belgrade and at the high school campus.

(HD video) One of the color stations is shown, with high school students running their way through the flying colored powder.

Shown is a group photo, or at least part of the group, of students gathered at the conclusion of the event. Further coverage is forthcoming both online as well as in the October 13 issue of the Bonanza Valley Voice newspaper. Also, the October 13 issue of the Bonanza Valley Voice will include fundraising information from the 2016 Color FUND Run while also making note of what school events were made possible with funding from the 2015 Color FUND Run. Additionally, other information will be published that outlines the fundraising that is done by various school-related groups in a given year. That list does not include some student groups such as the Junior Olympic volleyball or the B-B-E Wrestling Club, which are groups not operating under the legal umbrella of B-B-E school finances.