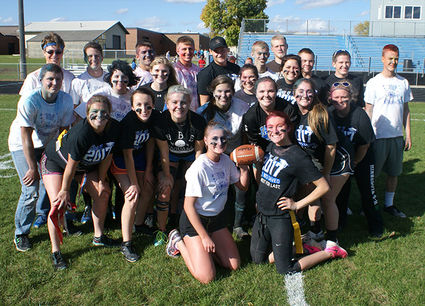 The seniors, including players and their coaches, gather at midfield at B-B-E's football stadium following their win in the annual Powder Puff football game.

The Powder Puff football game between girls in the junior and senior classes at Belgrade-Brooten-Elrosa was held on Wednesday afternoon, October 5 following the second annual Color FUND Run. Instead of the traditional flag football format used over the years, B-B-E has adopted use of a modified "catch the flag" game in the past couple of years in order to minimize the chance of injury. In the new format, one touchdown is worth one point, earned by capturing one of two footballs placed inside hula hoops and running them back past midfield without having a flag ripped from a player's belt. Two points can be scored if the touchdown is scored by a forward pass across the midfield line.

(HD video) The first half of the Powder Puff football game on October 5. You can enlarge the video player for better viewing and change the quality to 720p.

This year's game was entertaining from start to finish, with the juniors racing out to an early 3-0 lead. The seniors then stormed back to go up 5-3, only to see the score fall to a 6-6 tie before the juniors pulled in front 7-6 just before halftime.

With senior Jen Boyle leading her team as the game's MVP, she scored a touchdown early in the second half to tie it at 7-7. The seniors ultimately shut out the juniors in the second half on their way to a 10-7 win. Following the game, many juniors and seniors were seen smiling at one another and trading hugs after what was undoubtedly a hotly-contested game.