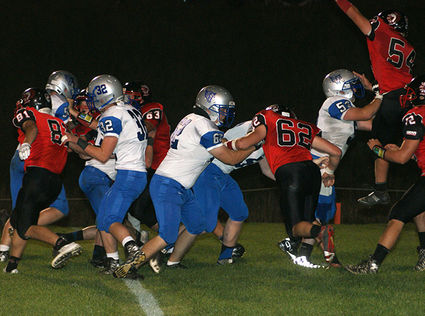 The B-B-E Jaguars and WCA/A Knights tussle on an extra-point kick attempt in the first half.

The Belgrade-Brooten-Elrosa Jaguars could not have gotten a better start to their road game in the heart of Grant County tonight (Friday, September 30). The hosts, West Central Area/Ashby, sputtered on their first series of the game and suffered two penalties while trying to get a punt off after their drive stalled out inside the B-B-E 43-yard line.

With 9:18 on the clock, the Jaguars started a drive from their own 19-yard line. With some big plays helping lead the way, the Jaguars scored with 11 seconds left on a seven-yard run by Adam Jaeger. Jacob Weller's PAT kick made it 7-0.

Right away on WCA/A's second drive, B-B-E's Seth Roering stuffed the run for a five-yard loss. The series quickly became a three-and-out, and with 11:09 left WCA/A punted.

What came next was nothing less than electric, as B-B-E's Adam Jaeger ran in a 44-yard touchdown on the drive's first play. The PAT kick was wide left, so with 11:02 left in the second quarter the Jaguars had a 13-0 lead.

WCA/A then scored their first touchdown on a 62-yard drive capped by a 21-yard catch by Levi Larkin. The PAT was good for a 13-7 score with 6:14 left.

B-B-E then went three-and-out, hurt by an offensive pass interference call, and they punted.

With 4:24 left, WCA/A started from B-B-E's 41-yard line and converted a fourth-and-five play on their way to scoring on a seven-yard run by quarterback Ross Anderson. The PAT was shanked, leaving the score a 13-13 tie.

B-B-E had a great start in the second half when they scored on a 60-yard drive that was sparked by a 21-yard run by Jaeger down the left sideline. Isaiah Gilbert ran in a 37-yard touchdown run with 9:45 on the clock. The PAT was blocked, making the score 19-13.

WCA/A then scored two consecutive touchdowns on a 61-yard run by Jake Drechsel and a five-yard run by Brady Sabolik. The first touchdown's PAT failed, but after Sabolik scored they got a two-point conversion on a pass play. With 9:24 left WCA/A had a 27-19 lead.

B-B-E then mounted a drive from their own 20-yard line, but it ended with an interception with just over four minutes to go. WCA/A then fumbled the ball on their first play of the series with 3:37 to go on the Knights' 15-yard line.

B-B-E made the most of the fumble recovery, with Jaeger scoring on a six-yard run with 2:10 left. Jared Weller grabbed the two-point conversion in the far back right corner of the end zone. Score: 27-27!

WCA/A's next series stalled out on fourth down with an incomplete pass. B-B-E tried driving but ended up punting on a fourth-and-32 possession on their own 23-yard line. With just seconds to go, WCA/A took a knee to bring overtime.

WCA/A's defense was "lights out" in overtime, as they held B-B-E to gain zero yards on their first three plays. On fourth down the Jaguars were penalized for having 12 players on the field. Then on fourth-and-15, Jacob Weller booted a field goal attempt, but it sailed just barely wide left.

Then on WCA/A's overtime possession, Caden Fernholz ran on a sweep to the right and punched in the game-winning touchdown from 10 yards out.

(HD video) The B-B-E Jaguars and WCA/A Knights go at it in overtime on September 30 in Barrett.

Next for the Jaguars (1-4) is the annual Homecoming game on Friday, October 7 when Kerkhoven-Murdock-Sunburg comes to town. The Fighting Saints are 2-3 overall after losing 14-12 to Parkers Prairie tonight. For their Week Six game, WCA/A travels to Parkers Prairie (4-1), whose only loss this year so far was to B-B-E.

WCA/A had 293 total yards with 218 coming on the ground. Junior quarterback Ross Anderson was 9-for-15 with 75 yards and one interception.

Both teams had 16 first downs.

B-B-E had 285 yards rushing (48 carries) while junior quarterback Ryan Illies had 6-of-13 passing marks for 16 yards.

Here's a related story/column...from this past summer. WCA/A's quarterback's father, Pat Anderson, was killed in an accident on July 30. He was the WCA high school's Dean of Students and also Activities Director: http://bbejaguars.blogspot.com/2016/08/tough-news.html