Offering and funds raised earmarked to cemetery and grounds upkeep 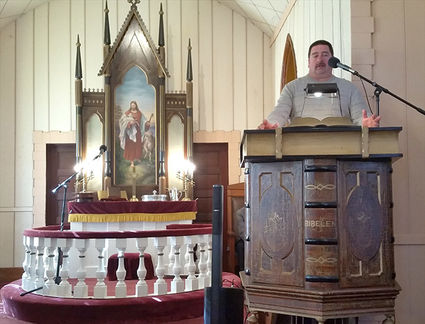 Pete Paulson gave a few comments at the conclusion of the worship service.

On Sunday, October 9, a fundraiser service was held at Crow Lake Lutheran church in rural Belgrade. The purpose was not only to gather with friends and family with ties and attachments to the church but also to raise money to help continue maintenance and upkeep of the church and cemetery. A total of about 40 to 45 people were on hand for the windy but sunny afternoon of fellowship and good company.

The Bonanza Valley Voice newspaper had a few photos from the worship on the front page of the October 13 issue. At some point in the near future, an online photo gallery will be available with photos from the event. You can watch a truncated video of the worship service below.

In the summer of 1877, forty people met at the Jens Tolstrup farm on the south west shore of Crow Lake to incorporate the new church called Our Saviors Evangelical Church of Crow Lake.

The first minister came from Willmar by horse and buggy or sleigh to have 12 services a year for a salary of $60.00 per year.

The church building was started in 1881 and finished in 1883. It was made of hand sawn lumber and mostly donated labor. Some labor was hired at $1.50 per day. The yellow brick church known in the area as the Danish Church, was designed following the Georgian Revival Architecture similar to churches in New England. The tall tower and spire of the steeple were rebuilt in 1987.

The services were given in the Danish language until 1947 when they switched to English. In 1966, they became members of the Free Lutheran Synod.

The church was dissolved due to declining membership on Feb. 28, 1991.