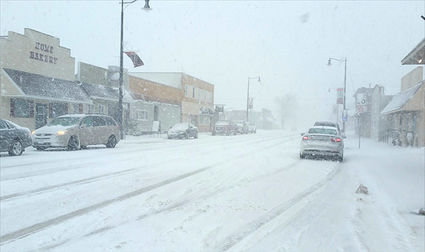 A view of Main Street in Brooten at about noon on November 18.

A severe winter storm has turned into a full-blown blizzard on Friday, November 18 across central and west central Minnesota, blanketing the Bonanza Valley area with at least six to eight inches of wet, heavy snow.

No travel is advised on any roads, including major highways as of Friday afternoon. Yes, it's that bad outside!

The Stearns County highway department pulled their snow plows off of the roads at 8 p.m. on Friday night due to the high winds. By 1 a.m. on Saturday, they resumed plowing.

City crews in Brooten worked late into the night on Friday and then again early Saturday morning clearing out the streets.

(Video) Blizzard conditions shown west of Brooten late in the morning of November 18.