Quite the night of wrestling in Paynesville

Paynesville wrestling tournament goes down to the wire 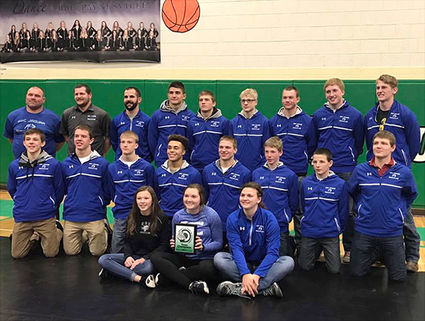 The B-B-E Jaguars, including athletes, student managers and coaches, with the team trophy in Paynesville on January 13.

It was a pure dog fight the entire night. Round after round, the Belgrade-Brooten-Elrosa Jaguars wrestling team was stuck in second place, right behind front-runner Paynesville who took a one-point lead after the first round was in the book at their home tournament on Friday, January 13.

After the semifinals, the host Bulldogs gained more separation with the Jaguars and jumped ahead 156.5 to 146. In third place at that point was Sartell-St. Stephen, who was at 141.5. W-M/ML slipped from third to fourth at 114.5.

In the wrestlebacks, the Jaguars picked up a few key wins. One of them came from Dylan Kampsen who got a 10-3 decision. Another key win came from Jonah Voss, who won by pin. A third key wrestleback win was from freshmen Taiton Lindner, who trailed 2-0 in the first period but ended up pulling out an exciting 7-6 decision win. Seth Roering capped a stellar wrestleback round for B-B-E when he won by pin.

The tournament finals had a rough start - or so it seemed - when Blaine Fischer at 103, Canon Swanson at 113 and Tyler Bents at 126 all lost their championship matches. Swanson and Bents both lost by just one point in decisions, and Fischer lost by a major decision but managed to hold off from giving up a tech. fall. That was one of many points in the tournament where the Jaguars scrapped and scraped enough together to stay in contention for first place.

(Video) Coach Mueller talks about the big win for his team at the Paynesville tournament on January 13.

As the finals moved along, the Jaguars picked up a couple big titles from Isaiah Gilbert (145) and Adam Jaeger (152), and other wins followed in order in third-place matches from Jaguars such as Trevor Kern (fall 1:36), Seth Roering (fall 0:38), Spencer Amundson (7-4 decision) and Jonah Voss (fall 1:25). In their championship matches, Gilbert won a 15-5 major decision, and Jaeger won a 5-2 decision. In another championship match, Dalton Guzier lost an 18-6 major decision at 170 pounds.

(Right) In the video, catch an interview between head coach Jack Mueller and the Bonanza Valley Voice following the tournament.