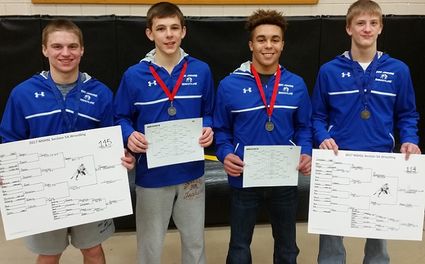 From left: Adam Jaeger, Tyler Bents, Isaiah Gilbert and Canon Swanson shown at the Section 5A tournament on February 25 at NL-S high school.

At 113 pounds, No. 6-ranked freshmen Canon Swanson looks to improve on earning a sixth-place medal (106 pounds) in 2016 by blazing his way through state beginning with his first match on Friday morning. Swanson (38-3) faces junior Chris Romero (20-7) of Grand Meadow High School LeRoy-Ostrander. Looming large in Swanson's part of the 113-pound bracket is third-ranked sophomore Spencer Miller (39-2) of Staples-Motley. Miller and Swanson are on a collision course in the quarterfinals if both win their openers.

At 126 pounds, sophomore Tyler Bents (29-11) looks to make the most of this previous two years of experience at state by battling deep into his state bracket. Bents' first-round opponent is freshmen Lincoln Carpenter (31-8) of Sibley East, ranked No. 10 in the latest Guillotine poll. If Bents beats Carpenter, he would face a state-ranked opponent in the quarterfinals in either No. 3-ranked junior Jamaal Baird (32-4) of Deer River or No. 5-ranked freshmen Owen Bjerga (34-7) of Staples-Motley. Baird and Bjerga square off in a very rare first-round match-up at state of Top-Five ranked wrestlers. Baird was runner-up out of Section 6A in his bracket, losing to No. 2-ranked Jake Nohre (36-1) in their section championship.

(HD video) The Parade of Champions that preceded the championship round at the Section 5A tournament on February 25 at New London-Spicer high school.

At 145 pounds and in his second trip to state, junior Adam Jaeger (39-2), ranked No. 2 in the latest Guillotine poll, is on a mission to earn state hardware after not making it to state in 2016. Jaeger's first-round opponent is sophomore Cole Vanoverbeke (31-10) of Minneota. If Jaeger wins his opener, his likely quarterfinal opponent would be No. 7-ranked sophomore Chandler Mooney (33-4) of Roseau.

At 152 pounds, junior Isaiah Gilbert (31-11) is making his first state appearance and hopes to make the most out of the opportunity. His first-round opponent is No. 8-ranked sophomore Ian Frenzel (32-4) of Blackduck/Cass Lake-Bena. If Gilbert beats Frenzel, his likely quarterfinal opponent would be No. 2-ranked junior Zach Buseman (37-5) of Blue Earth Area.

The Bonanza Valley Voice is very excited about covering the tournament and attending the opening round on Friday morning.