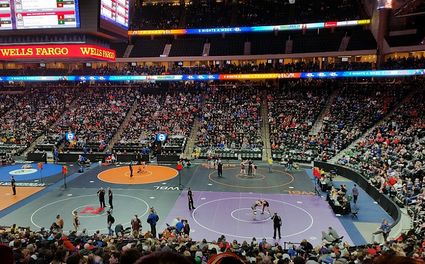 The Xcel Energy Center's lower level was almost filled to capacity for the quarterfinal round of wrestling on Friday, March 3.

The first day of wrestling at the Class 1A individual tournament at Xcel Energy Center in St. Paul was nearly a wrap when the Bonanza Valley Voice interviewed Belgrade-Brooten-Elrosa head coach Jack Mueller for this interview on Friday night, March 3. The state quarterfinals round had just completed.

Action resumes on Day Two of state at 9 a.m. on Saturday. The Bonanza Valley Voice will update the Jaguars Sports blog as often as possible throughout the day as match results come in. http://bbejaguars.blogspot.com

At 9 a.m., Canon Swanson (113) competes in his second wrestleback match of the tournament. He needs a win in order to get into the placing round. At the same time, Adam Jaeger (145) competes in the Class 1A state semifinals. The stakes are high!!!