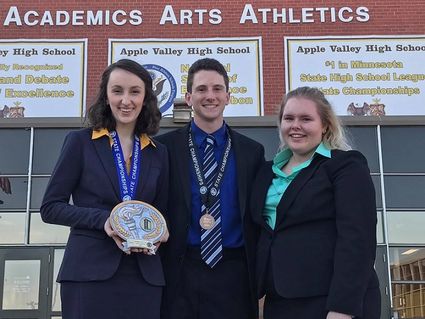 Since 2011, the Belgrade-Brooten-Elrosa speech team has had at least one team member advance and compete at the Class 1A state meet. Not only that, but each year since 2011, at least one of B-B-E's state participants have advanced to the state finals in their respective category. In 2012, the same year the team won their lone championship trophy in Section 5A, senior Erin Reps earned the program's first-ever state title when she placed first in Extemporaneous Reading.

Even more impressive: Tengwall was one of just two speech entrants in 2017 who earned the fourth state medal of their careers. The other was Kate Folkman of Morris Area.

Tengwall was in good company at state, as two fellow B-B-E seniors also competed at the highest level. Nick Steinhofer, in his second trip to state, earned a spot in the state finals and took eighth in Extemporaneous Speaking. He is the first B-B-E speech team member to compete in the state finals in that category.

Senior Austin Meyer, in her third trip to the state meet, finished 14th in Serious Interpretation of Prose.

Don't miss more coverage of the B-B-E speech team in the April 27 issue of the Bonanza Valley Voice newspaper.