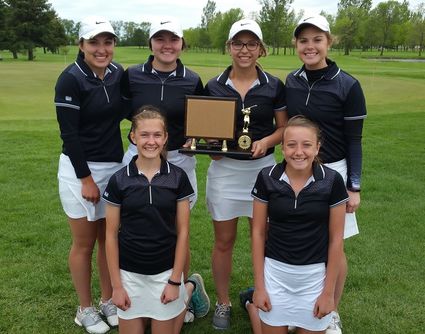 The script did not play out like it did two years ago, when the conference championship went down to the absolute wire between Belgrade-Brooten-Elrosa and Osakis. In 2015, both teams entered the final Central Minnesota Conference meet tied for first place with 1,113 strokes each. The Jaguars won the final meet by a six-stroke margin to earn the program's second conference title in school history.

Now, for the third straight season, the B-B-E girls' golf team has earned the Central Minnesota Conference championship. The Jaguars did so by putting in steady performances throughout the entire CMC schedule starting on April 18 at ShadowBrooke Golf Course. In that first CMC meet, the Jaguars shot a 184, two strokes better than Osakis. The lead in the conference grew over the next two meets, and the Jaguars ended up taking the CMC title with a 25-stroke lead over runner-up Osakis. The final standings showed B-B-E in front with a 1,270 compared to Osakis's 1,295. In third place was Pierz with a 1,419.

On the final day of action in the CMC, two meets took place on Friday, May 19. First at Osakis, where the host Silverstreaks won by one stroke over B-B-E (192 compared to 193); the final meet was at home in Brooten, at the Prairie View Community golf course. The Silverstreaks won this meet as well, by a 179 to 180 margin.

The top four B-B-E varsity golfers also earned All-CMC honors, with Jaden Gossen taking third place overall with an average of 43.3. In fourth was Jacqueline Gossen with a 43.7, while Maddie Baker took fifth with a 45.5 Emily Wosmek tied for sixth place with Paynesville's Alyssa Meed, both having a 46.

The 2017 CMC medalist was Alayna Eldred of Osakis, with an average score of 36.2.

Next for the Jaguars is the first round of the Section 5A tournament, which is next Wednesday, May 24 at the Benson golf course.