Little Theater's 'Three Murders, and It's Only Monday' now showing 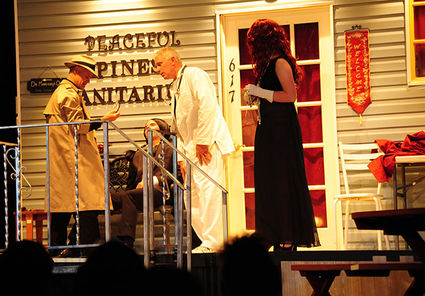 The show "Three Murders and It's Only Monday" opened with a near-capacity crowd on Thursday, August 3 for the first of seven performances at the Little Theater in New London. Director Thom Rosengren couldn't have been happier with the turnout.

"Tonight was great," he said while his cast shook hands and greeted fans outside the Little Theater after the opening performance was complete. "We're very pleased with the turnout. We are excited for the remaining nights."

Tickets are $15 for adults and $8 for kids ages 12 and under. Rosengren, from Belgrade, is a graduate of Belgrade-Brooten-Elrosa in 1996 and was a well-known commodity on the B-B-E high school theater stage.

The play synopsis reads: Three murders have taken place over the course of a single night at Peaceful Pines Sanitarium. There seems to be no link between the victims: an old tramp stabbed with a dagger, a sea captain whose tea was poisoned and a ventriloquist who was shot. However, Private Eye Harry Monday is positive he can crack the case, no matter how strange it might seem. But at the crime scene, he realizes just how complex these seemingly random murders are, and how dangerous the killer really is. Throw into the mix a lawyer, a doctor, a socialite, a Swedish gardener, a nurse and an Indian, all of whom seem to have a motive of some kind, and the culprit's identity is anyone's guess. With a storm raging outside, and a generator that can't seem to stay on, Monday will have to rely on all of his wits, plus a little bit of luck, if he's going to find the culprit before he becomes the next target in this hilarious spoof of old-style film noir.

Thom Rosengren provided the following comments for director's notes, "Twenty-some years ago, I stood on stage at Belgrade-Brooten-Elrosa high school in the roles of Danny O'Donnell and Hans the Gardener under the direction of my high school English teacher, Benita Otterness. Today you will see my vision for Three Murders and It's Only Monday. We've taken the setting from the interior to the exterior of the Peaceful Pines Sanitarium."

"Directing a show means finding a unique vision for that show and bringing it to life, so you, the audience, can experience the laughter and the fear that each of the characters on stage do! Each person who auditioned and was cast in this show brought a gift that you will see on stage today. Each character you see on stage, who is dressed to impress and outshine the others, is a suspect in these three murders that you will witness. You, as the audience, should pay close attention to each suspect and the stories they share, and see if you can help Harry Monday, private eye, solve these murders."

"I sincerely hope that you continue supporting the Little Theater and promote community theater for years to come. We are blessed to have such a great space to provide high-quality entertainment at a reasonable price for all community members. Sit back, relax and put your sleuthing hats on to solve the Three Murders (and It's Only Monday!)"

Les Graham of rural Belgrade plays the part of Dr. Morrissey. Graham has been in several plays over the last five years for the Little Theater. His wife is Kathy, and they've been married for 38 years. They have three adult children and 11 grandkids. His free time is spent with grandkids, his draft horses, bee keeping and writing. Graham is a published author, and he is excited to announce that he is close to finishing his first screenplay.

This is Thom Rosengren's second adventure directing at Little Theater. Last summer he directed "Those Crazy Ladies in the House on the Corner", and he is excited to be directing this show with such a talented and diverse group of people. It has both seasoned actors and newcomers to the stage.

"I hope everyone enjoys my vision for the show. I want to give special thanks to my family for their support, and also to the cast and crew for their dedication to making this show a success," he added.